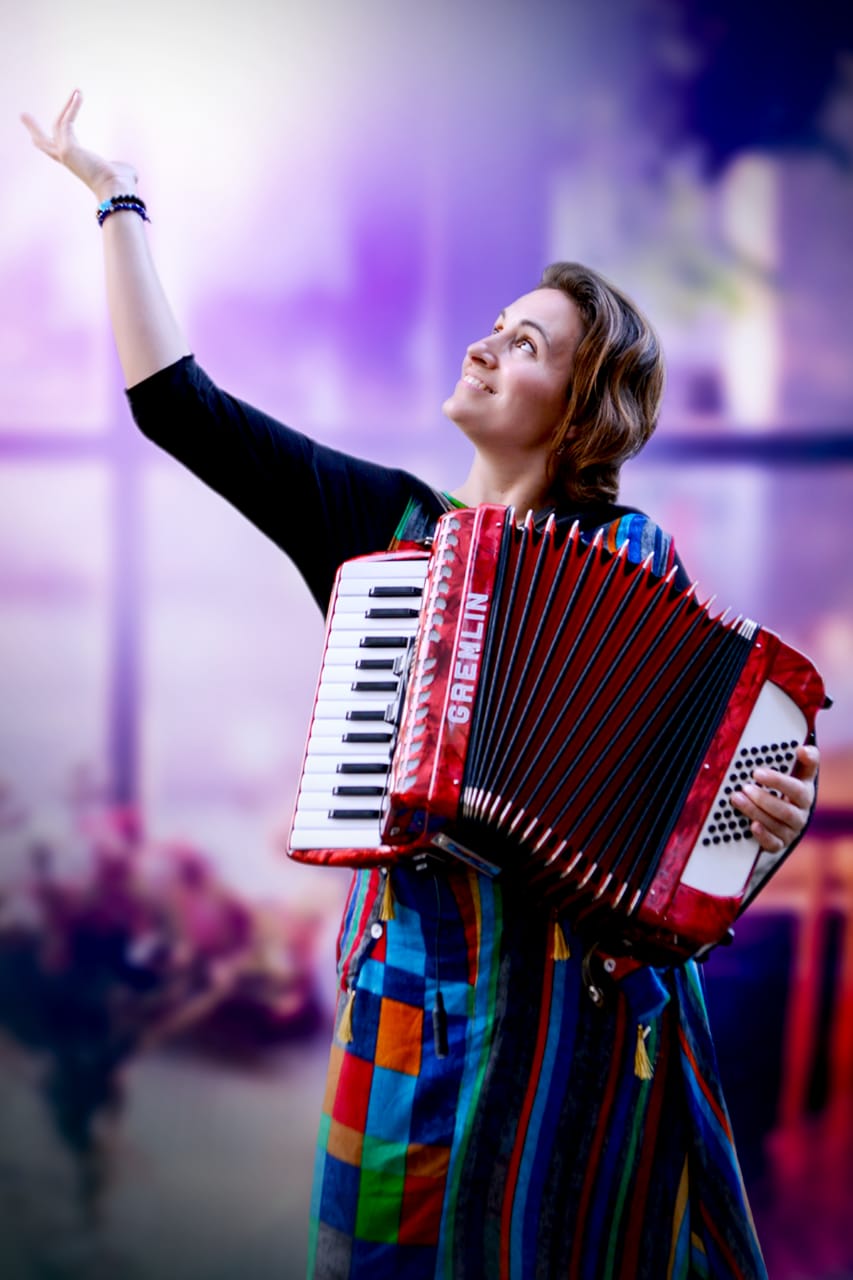 You may have seen her perform on BBC Television or at The Royal Shakespeare Company, but did you know TALIA has been capturing the hearts of her audience since she was seven?

Her passion for music transcends language and genres and was ignited when her father took her to an accordion shop to choose her own.

Before that, she spent much of her childhood singing with her father while he played the concertina, a Northern Portugal folk instrument. She loved singing and grew to fully understand the pure joy of giving music to others.

Growing up in London in a large traditional Portuguese family, she would often find herself the centre of attention at family gatherings—playing her eclectic repertoire. Though described by her brother as “painfully shy”, TALIA flourished in these happy moments, with aunties, uncles and cousins dancing and singing along, as she sang and performed.

Her music lit up the room. Knowing this and understanding the power of music, TALIA continues to inspire and cast a positive, delightful glow over her audiences, as she brings her passion to the world.

TALIA’s musical accomplishments are many, and at the tender age of eleven she was already performing in a production of Dr Jekyll and Mr Hyde with the RSC at The Barbican. At twelve years old, TALIA performed for BBC Television, and at seventeen, she performed live on The National Lottery TV Programme.

In addition, TALIA has appeared at; The Royal Academy of Arts (alongside Jamie Cullum), at various festivals in the UK (including Glastonbury), and with Charles Castronovo from The Royal Opera House. She also performed in two exciting productions at The Kings Head Theatre in London (Quasimodo and Die Fledermaus).

When you are fortunate enough to hear TALIA perform, you hear her love for music. Her words come out strong and clear, directly from her heart. Audiences fall in love with her sound and are entranced by her magical presence.

With over a million views on YouTube, international performances in eleven cities, supporting Gary Kemp from Spandau Ballet, and collaborating with artist Randolph Matthews at the infamous Ronnie Scott’s Bar in London, TALIA is living her passion.

Her repertoire covers many music genres. She sings in English with a twist of Portuguese and Spanish and is equally happy playing both at intimate events and on a grand scale.

But you won’t only find her in traditional music venues…

TALIA has enjoyed performing in Art Galleries including Rebecca Hossack’s Gallery in London, Sharon Yamamoto’s Gallery in Holland Park, and for Sara Twomey who worked for Damien Hirst.

In 2019, she performed for a school for physically challenged children in Mumbai, India alongside the famous Indian singer Shaan. TALIA was told that her music inspired the children and those that attended. Her overwhelming feeling of gratitude for this opportunity and ability to help has inspired TALIA to pursue similar musical ventures.

Still true to her Portuguese roots, TALIA has been appearing at various community festivals including those at Grantham and Somerset this year, also a special event at Chancellors Hall, University of London representing the Portuguese Culture within Portugal, Cape Verde and Brazil. She was also interviewed by the Portuguese radio station, Radio Barca 99.6 FM in February of 2019.

In addition to her musical talents, TALIA runs Busking Workshops for CEO’s with the goal to inspire leadership, team building and communication with their employees.

TALIA is multi-talented and is always looking to improve the lives of others, be it through her moving and lively traditional music, her workshops, or original songs, such as “Happy Go London.” After spending time in the studio recording her First Ever Album that was achieved through her Crowdfunding Project, she now intends to increase her original pieces as she progresses through her rich musical life. 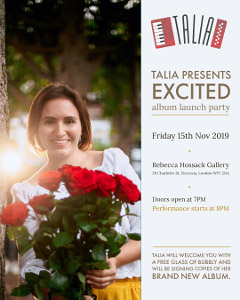 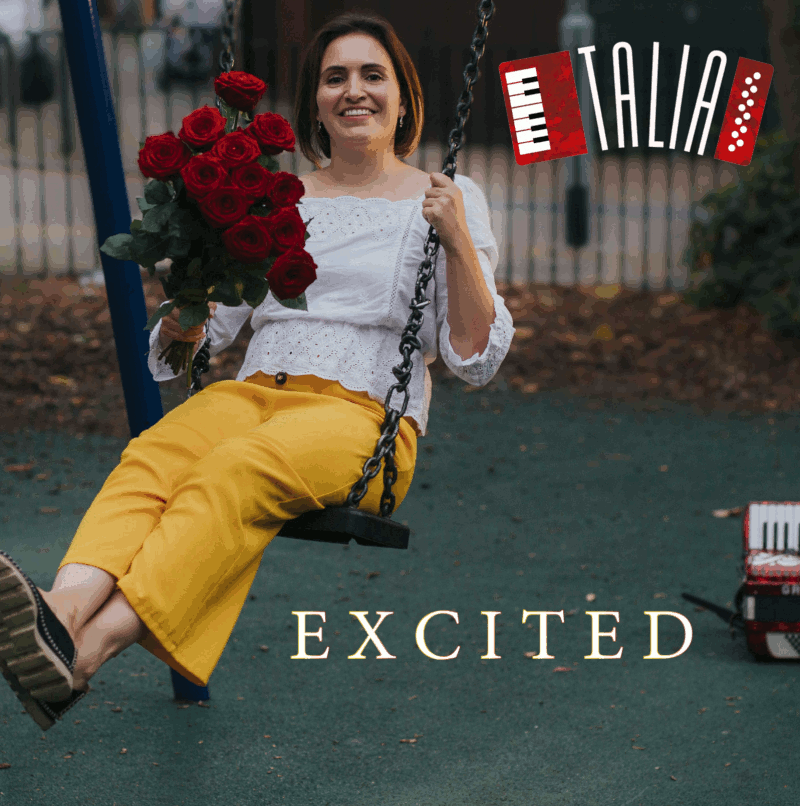 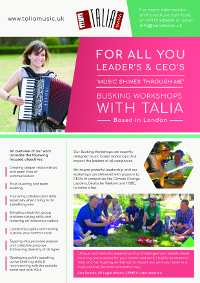 My Busking Workshops are aimed for Leaders and CEOs who are looking to enhance their team building skills and step out of their comfort zone. This workshop is creative and also highly rewarding. It is great for Team Building, Focus, Leadership Qualities moving outside your comfort zone and much more.

The joys of busking for a better world 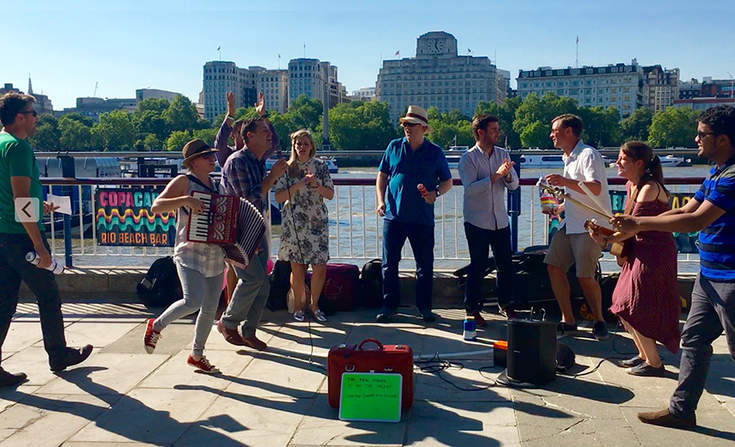 “To be honest, this wasn’t a runaway hearts-and minds success for the passers-by, but it did offer a crucial lesson. While spotlighting how a good team can move you beyond your comfort zone, it also underscored just how difficult it can be to communicate extraordinary threats and opportunities to ordinary people in their everyday realities. But as the push-back against globalisation and new technology grows, we must get a lot better at this.”

Please don't hesitate to get in touch for further information